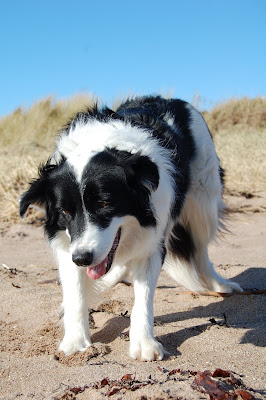 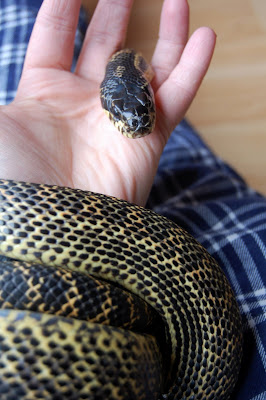 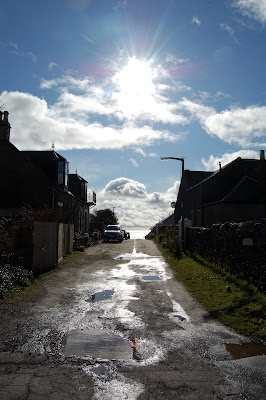 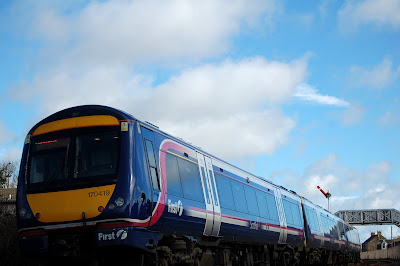 There has been little blog activity in the last wee while on account of my not being here. The lad and I left Magnus in the tender care of Sylvia and went off to look after other people's pets instead. I didn't like to mention it in adavance in case I have a following of blog reading burlgars.

Jazz the dog and Leo the snake belong to friends of ours lucky enough to be going on holiday and thus in need of animal sitters. We had a lovely time in a house filled with books, sunlight and learning. Our holiday home is conveniently situated between a railway line and the sea which allows the guest to hear both the sounds of waves and the 3.30 to Aberdeen. It was remarkably peaceful for a house normally occupied by two grown ups and three rambunctious boys.

The dog played football and went for walks along the beach. The snake writhed around a bit. One sticky moment came when I went to the freezer to get some emergency bread and found a plastic bag next to the ice cream tubs. It was filled with mice ( rats? I didn't stick around to tell the difference ) and chicks. Cold, hard and dead just waiting to be defrosted for Leo's tea. As a wise friend later said, that could almost put you off ice cream. Almost.

sounds like a nice trip away...even with a snake. did you have to give it a frozen meal?
and i don't mention travel either. one never knows whose watching. :)

Yikes, mice in the freezer would creep me out, just a bit. Glad you had a good trip. As always, the pictures are wonderful. I especially like the shot down the little street.

i am so envious! what a wonderful 'working' holiday!

did Magnus enjoy his time apart?

I love the street shot too.
Frozen chickens and rats? Ewwww.

HAHAHAHA! Tea for the snake. lol Having a DD who owns a large snake, and keeps frozen rats in the freezer for it, I know that you would be a bit put off by finding the mice.

We could start another MEME about the most disgusting thing in our freezers, eh? My entry is a four year old dead tortoise that I really need to bury under a rose, soon. I'm sure he's gone "off" by now, being in there about three years. And thanks for your comment on my blog. That was one of the few times I've stood still for a camera. hehe

I'm glad you had some time away with a lovely library and lots and lots of fun.

I do love snakes but the feeding part could be a little off-putting! Especially as we used to have pet rats and they are really cute. But I guess we've all gotta eat, hey? Glad your trip went well.