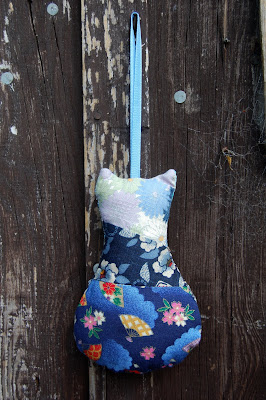 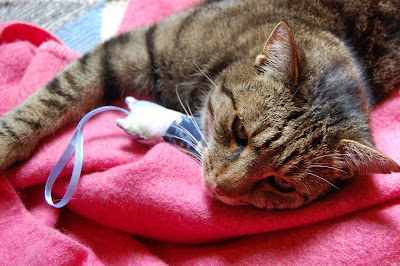 I've been spinning like a dervish this week. I know the sun is blazing down and Magnus is stretched out underneath the birch tree, yet the spinning bug bit. I have taken some lovely pictures but as the handspun is destined as gifts I won't post the evidence till I know the yarn has arrived at it's rightful home.

The redcurrants did me proud this year and they are waiting patiently in the freezer for me to buy a jelly bag and some sugar in order to turn them into redcurrant jelly. The bush was a sad little fellow found in our local Woolworths whose price had been reduced on account of the mould growing on the top leaves. I took it home, planted it in the right place and now I'm reaping the reward.

Another gift was this lovely lavender cat, made from Japanese fabric by my super talented SIL, Babs. It is intended for hanging in an inspirational place in Knitting HQ although Magnus would prefer it was left on the bed so that he can sleep fragrant dreams. I can just see him now, chasing after lavender scented mice...........
Posted by magnusmog at 18:50 11 comments 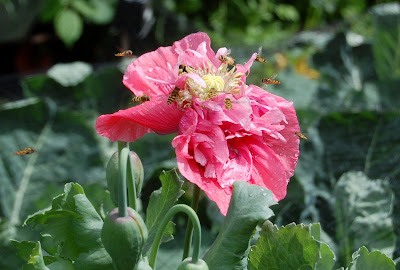 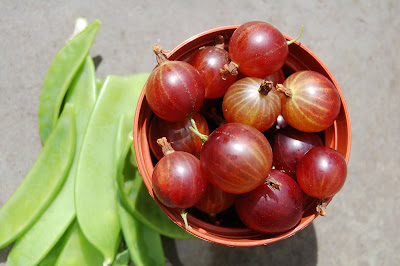 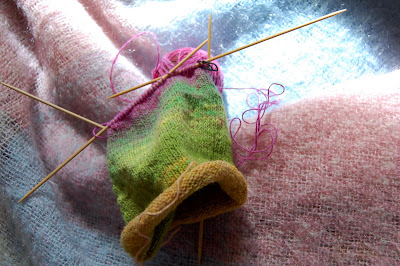 It's been a super sociable week here at Mog Towers. Sunday saw the family all meeting up for my dad's birthday lunch. I won't say how old he is but he can now be properly described as a pensioner. Before then, Sam my oldest friend in the world came over to spend a few days with us. I've known Sam since we were twelve and although she now lives in Australia, it is easy to slip back into the old ways. Thankfully she is a knitter and we had a pilgrimage to Twist Fibre Crafts and Di Gilpin's shop in St Andrews. Many skeins and books were bought and Sam has started on the slippery slope of sock knitting. I had intended a sock for myself but the Noro yarn I bought was too thin in places for my trusty 2.5mms so I ripped it back and cast on for a pair of legwarmers instead with no thin heel to worry about. The colours are gorgeous and I'm just doing a stocking stitch in a mindless mannner till I think they are long enough.

The garden has gone berserk in the summer mixture of rain and sun, I've been out picking mange tout and broad beans as well as all manner of berry. My hands smell of strawberries and I have minestrone plans for tea. The hoverflies seem happy just snacking on the poppies.
Posted by magnusmog at 13:53 3 comments 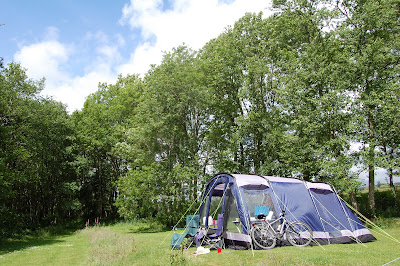 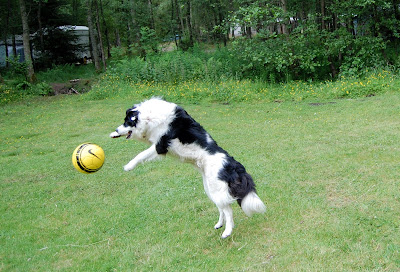 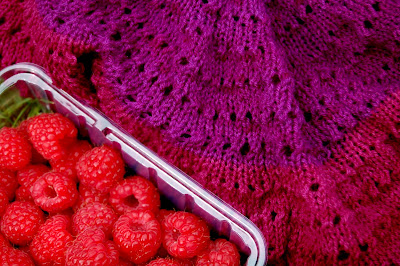 We've been meaning to get out in our tent for weeks and weeks but everytime we try, something goes wrong. People have been ill, rain has fallen along with Magnus' tail. Last week we decided that no matter what, we would head for a campsite and be brave.

And that's just what we did. We went at least 16miles from home, all the way to Glen Esk, near Edzell. The site is lovely with lots of trees and a little lake in the middle. No sooner had we put up the tent than we bumped into some chums who just happened to be spending the night under canvas too. Great fun was had watching Jazz, the incredible football playing dog and I learned that I am no good at Uno compared to three very clever boys. The weather was kind to us, it only rained while we were asleep and the local shop was selling the first raspberries of the season. Archie went off for miles on his bike and I worked on my Pi shawl which is nearly done but to the untrained eye still looks less like a shawl and more like an unsuccessful jellyfish.

Big news? HUGE NEWS! My brother called from California to say that he and his partner have got engaged. They want to get married in Scotland next spring. I can't wait, even if means having to wear a frock. Congratulations Tom and Lara!
Posted by magnusmog at 08:54 10 comments